An interview with Roberto Pisano

Roberto Pisano has a history of representing prominent individuals and entities in high-profile Italian criminal proceedings, including various cases of corruption involving international corporations and their top officials (with multiple investigations in the United States, the United Kingdom, France, etc); various cases of extradition, including the recent FIFA investigation and representation of foreign states; three cases of alleged tax fraud involving the former Italian prime minister; a case involving a major US bank in the bankruptcy of the Parmalat group; a case involving a claim for restitution of antiquities by the Italian Ministry of Culture against a prominent US museum; various appeals in foreign jurisdictions against freezing and confiscation of assets; and as Italian criminal counsel for foreign and Italian multinationals conducting internal investigations. Mr Pisano also advises and represents foreign governments.

1 What are the key developments related to anti-corruption regulation and investigations in the past year in your jurisdiction, and what lessons can compliance professionals learn from them?

There is no doubt that the relevance of compliance is constantly increasing, and especially that of compliance programmes for corporate entities. For a corporation to be held responsible for a corruption offence, the offence must have been committed in the interest or for the benefit of the corporation by its managers or employees. However, a corporation can avoid liability by proving that it had implemented an effective compliance programme, designed to prevent the commission of such an offence.

This applies in particular to offences committed by corporate employees. Where an offence was committed by senior managers, even the implementation of an effective compliance programme will not suffice to preclude liability. In such cases, responsibility is avoidable only by proving that the perpetrator acted in ‘fraudulent breach’ of corporate compliance controls.

With respect to key developments relating to anti-corruption prosecution, in the past year the prosecution of corruption offences has intensively continued, with particular emphasis on corporate entities and their officers, and especially on their alleged involvement in the corruption of foreign public officials in Algeria and Nigeria.

With respect to Algeria, in September 2018 it ended the trial of first instance before the Milan Court against the companies Eni Spa and Saipem Spa, some of their former top managers and an agent of Saipem Spa, in relation to the charges of corruption of the former Algerian Energy Minister, in connection with the alleged unlawful award of several tenders in Algeria in the period 2007–2010. Eni and its top managers were acquitted on the merits, while Saipem and its top managers and agent were convicted with sentences of up to five years and six months’ imprisonment. Appellate proceedings are currently pending.

With respect to Nigeria, it is currently continuing the trial of first instance before the Milan Court against the companies Eni Spa and Shell, some of their top managers and the former Nigerian Minister of Petroleum in relation to charges of corruption of the former President of Nigeria, the Attorney General and Minister of Petroleum, in connection with the alleged unlawful grant in 2011 of an oil-prospecting licence located in the Nigerian offshore territorial waters. The decision of first instance is expected in the course of 2020 (while two defendants who opted for the summary trial were sentenced in September 2018 to four years’ imprisonment and appellate proceedings will take place in 2020).

2 What are the key areas of anti-corruption compliance risk on which companies operating in your jurisdiction should focus?

The most important area is certainly the one of intermediation, agency or consultancy agreements. All of the most relevant investigations and prosecutions involve foreign citizens as key players in the alleged corruption scheme. Acting as agents, consultants or intermediaries in the foreign country, these parties allegedly do not perform an effective, qualified business activity but act as a conduit for transferring unlawful payments to the foreign public officials concerned.

Additionally, even if Italy does not apply in principle an extraterritorial jurisdiction, in practice the existence of the Italian jurisdiction is broadly asserted by Italian prosecuting authorities and broadly affirmed by Italian courts, including with respect to foreign companies and foreign individuals. This is because it is sufficient that at least a segment of the prohibited conduct takes place in Italy – an easily satisfied condition when an Italian company is involved. The extension of jurisdiction to alleged foreign offenders then derives from the principle of their participation as accomplices to the criminal conduct of other offenders undertaken in Italy.

3 Do you expect the enforcement policies or priorities of anti-corruption authorities in your jurisdiction to change in the near future? If so, how do you think that might affect compliance efforts by companies or impact their business?

No, not significantly. The most interesting developments will concern the decisions of the highest courts (the Court of Appeal and Court of Cassation) about the alleged responsibility of the corporations and managers currently subject to investigations and prosecutions. Furthermore, the evaluation by the highest courts of the effectiveness of the related compliance programmes will be extremely interesting.

4 Have you seen evidence of continuing or increasing cooperation by the enforcement authorities in your jurisdiction with authorities in other countries? If so, how has that affected the implementation or outcomes of their investigations?

Yes, absolutely. There are no high-profile investigations and prosecutions – including the ones we have already mentioned – that do not include extensive cooperation and exchange of information and evidence with foreign authorities. In most cases, there are multiple investigations in various states (the United States, the United Kingdom, France, among others, in addition to Italy) and there is a need, therefore, for a coordinated and coherent defence strategy for all jurisdictions (encompassing the decision whether to cooperate with prosecuting authorities, timing and contents of defence briefs and documentation to be filed, among others). In any event, these investigations and prosecutions always involve the use of letters of request to foreign authorities, to gather relevant evidence located abroad and usually to freeze funds held in foreign bank accounts and assets located abroad. Consequently there is a need to properly ascertain, and where necessary challenge, compliance with the relevant provisions on mutual legal assistance and on the admission of evidence.

5 Have you seen any recent changes in how the enforcement authorities handle the potential culpability of individuals versus the treatment of corporate entities? How has this affected your advice to compliance professionals managing corruption risks?

No. As mentioned previously, Italian authorities will investigate and prosecute at the same time and, with the same emphasis, both the individual offenders and the corporations in whose interest or for whose benefit the criminal offence was committed. The corporation’s responsibility is qualified by the law as an ‘administrative offence’, but the matter is dealt with by a criminal judge in accordance with the rules of criminal procedure, in proceedings that are usually joined with the criminal proceedings against the corporation’s officers. 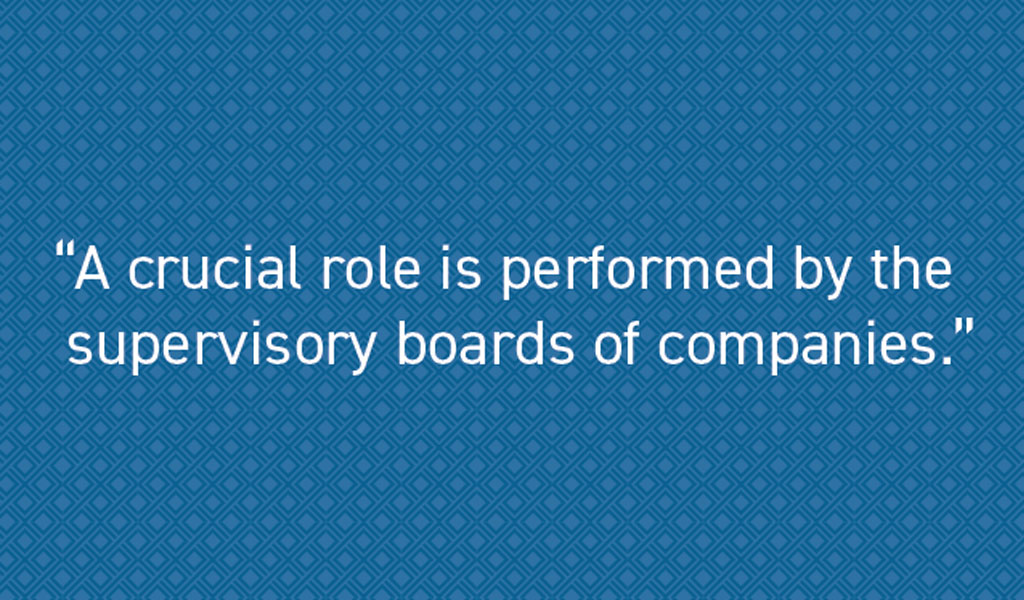 6 Has there been any new guidance from enforcement authorities in your jurisdiction regarding how they assess the effectiveness of corporate anti-corruption compliance programmes?

A crucial role is performed by the supervisory boards of companies, which have the fundamental function to monitor and continuously supervise the effectiveness and adequacy of the compliance programme or internal control system of the company, for the purpose of excluding or mitigating the corporate criminal responsibility. In particular, in accordance with the Italian law and case law, it is a must – in order to obtain exclusion from responsibility or leniency – that the supervisory board is constituted of qualified professionals and it has, and effectively exercises, powers of action independent and autonomous from the ones of the management (and of other corporate bodies).

However, it should be noted that, according to the Italian case law, where the predicate criminal offence was committed by a senior manager, the standard to prove that the compliance programme in place and the surveillance by the supervisory board were totally adequate and effective, is extremely high and almost unreachable in practice.

7 How have developments in laws governing data privacy in your jurisdiction affected companies’ abilities to investigate and deter potential corrupt activities or cooperate with government inquiries?

Certainly the laws governing data privacy have made the process of gathering information for the purposes of internal investigations much more complex for corporations. However, this was necessary because laws protect fundamental human rights. In any case, in Italy, since 2000, new provisions have entitled criminal lawyers to carry out ‘defence investigations’ on behalf of clients, including corporate entities, with express derogation from all the requirements of privacy law to the extent necessary for the performance of the investigations.

What are the critical abilities or experience for an adviser in the anti-corruption area in your jurisdiction?

It is crucial to have experience in representing clients, both corporations and individuals, in the frame of high-profile corruption trials, because the practice might be very different from the theory (especially where multinational companies are involved, and there are multiple investigations in various jurisdictions, such as the United States and the United Kingdom, among others).

What issues in your jurisdiction make advising on anti-corruption compliance challenging or unique?

For advice to be appropriate and effective, a deep knowledge of the specific context is required, namely concrete experience of interacting with prosecuting authorities and courts, in the frame of Italian investigations and trials (to predict, where possible, the likely strategy or conduct of the prosecutors and the rulings of the courts in the light of certain determined elements).

What have been the most interesting or challenging anti-corruption matters you have handled recently?

We have handled three separate cases of alleged corruption of foreign public officials, involving corporate entities, their managers and foreign agents or consultants. The existence of multiple investigations in various states (the United States and the United Kingdom, among others) in itself created a considerable degree of complexity, requiring all steps of the defence activity to be carefully coordinated with foreign counsel. Additionally, freezing orders on foreign bank accounts and assets were issued, which consequently had to be challenged properly, again in close coordination with foreign counsel.